Return of a Warlord Emerges

It’s been a while.

Summer has come and gone and now it’s time for book four. Return of a Warlord is being crafted and Shitty Draft #1 is slowly coming together.

It didn’t take me as long as I thought it would to slip back into my writing routine; getting up at six and writing, resisting the urge to check mail and stats. I put my background music on, brew coffee, eat biscuits and stare at the screen. Seconds later, my fingers are working. 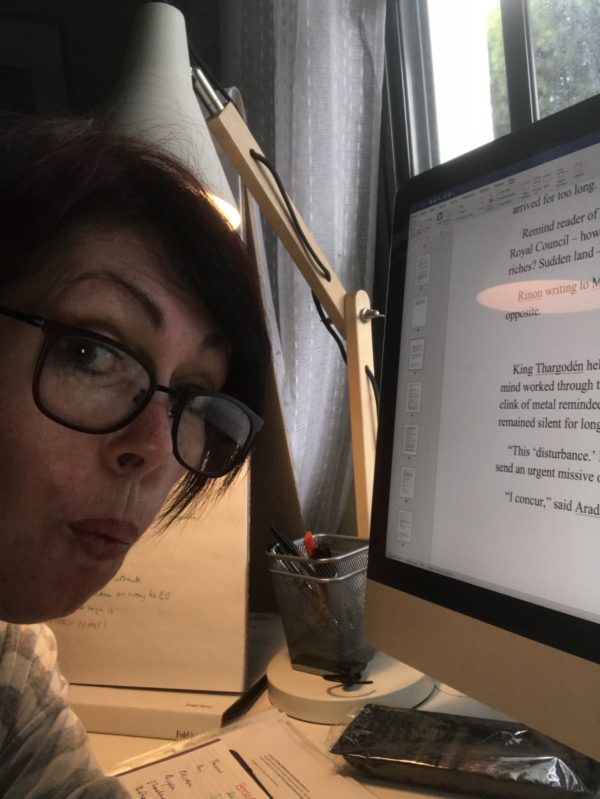 Yes I know. My lamp doubles up as a dunce hat, but on with the story.

This morning I managed to get through half a packet of Cadbury’s chocolate fingers. That’s the thing about writing action scenes; they’re fattening.

So where are we? Chapter six and the crew are heading back to the forest. I just scheduled with my developmental editor and my beta reader is right there with me, thrashing out a skirmish in the woods. Oh, I love this part of the process, those moments when you get the first glimpse of something you really like, a passage that just pulls everything together, a thought or reflexion that just feels right, that closes that chapter the way you want it to.

The bummer is that I have to eat and do the shopping. I have to put the washing machine on and look like a normal person in normal clothes and brushed hair.

So apart from the draft, I have two events booked for the next six months. I will be in Glasgow for the British Fantasy Society’s FantasyCon. I’ll be there from the 18th to the 20th of October, so if any of you are passing that way, I am staying in a pub hotel – extremely convenient for fantasy writers, let me tell you.

In March, I’ll be attending the Self Publishing Show Live in central London and the day after, I’ll be at the London Book Fair, and hopefully meeting the wonderful people from ALLI, the Alliance of Independent Authors. It promises to be fun and informative. If you’re around, drinks are on me. I’ll be in London from the 8th to the 11th of March.

Finally, I am planning to launch a box set with the first three books in the Silvan Saga. This is the Warrior Cycle. The next books in the series are the Warlord Cycle. The set will only be for Kindle initially although I am looking into producing a physical version.

So that’s about it for now. It’s time for breakfast and for the outside world to come into focus. Deviants are crawling back into the shadows, Fel’annár is waving goodbye for the day and the sun has come out. Until next time.

Oh good. I’m so glad all is going well with the next instalment. Also, I’m pretty sure chocolate is an essential ingredient in the creative process. Good luck with it all.

I thoroughly enjoyed this post. I am working on my first full length novel and when I sit at the computer I find the words flow but I have to open the document first and I am the queen of complacency.
I find that all scenes are coffee scenes so far. I am loving the multi-purpose lamp. 🙂
You have some busy months coming up.
Tasha @ bookwormscornerblogspot.com

Complacency is not good. I think there comes a time when you HAVE to get up. You HAVE to open that document because what you want to achieve is in your head and needs out. When you get to that stage – that is what marks the beginning of the end.
I never realised the bargain I was getting when I bought this lamp!

Just finished book 3, and for the life of me something odd happened to me near the large battle scene near the end. Let me tell you I have been reading fantasy and sci-fi for more than 5 decades, and I have read everything I could get my hands on. Amazon, for example, said I read more than 200 books via kindle so far THIS Year.

In other words, I consider myself a fairly experienced reader in these genera’s – but so far THIS series has done something that has only happened to me twice before ; once when reading Tolkien’s work for the 1st time, and then again when reading Terry Brooks work for the 1st time, and that is this: I found myself near crying on MULTIPLE occasions (a very unusual reaction from this 61 year old ‘tough’ guy). Crying not just because I was sad – I wasn’t. And not because I was happy – certainly some scenes were happy, but that wasn’t it either.

I have decided it is due to the skill of the Author, who is weaving emotions right into her writings, surrounding and supporting the words themselves. Some writers can weave words into a fantastic story (but their stories, as complex as they may be, seems to lack…complex emotion). Some other writers can pour emotions into their writing, which can make the reading difficult (depending on the distance between the authors emotions and the audience). But THIS AUTHOR, like Tolkien, early Brooks, and very few others, is skillfully weaving entire sets of emotions within the story itself – so that each color is brighter, each scene longer and more engaging, each paragraph a chance to make one laugh, cry, celebrate, hope, despair – or (hard to believe) to do All Of These in the same page.

I will keep following this Author, as I do for a very few others – a select group, in my view. I will also hope that Another Book is Following Soon!

I saw this post straight away, Alfred. But I waiting until today to get back to you. Any positive feedback makes my day, but this post made my year. Let me explain.
When I was writing Dawn, I remember building up that moment. Everything about this series, the story and its characters was so clear to me at that stage. I wanted to do them all justice, make the reader feel what I did. Lending emotion without words, placing the reader right there, making them feel what you want them to – THAT is the magic of reading, so much more interactive than the movies!
You are the first reader to tell me I achieved that. AND you compared me with Terry Brooks and Tolkien!!
I am so glad you have you as a reader. As I write this I am drafting Return of a Warlord. It won’t see the light until April next year. I hope I can achieve something similar with book 4, and that you will be here to tell me if I succeeded.

I have to completely agree with Arthur. Definate feels in these books. Just finished the 3rd book and was here looking to see when I could find the next. I listened to all 3 books within 3 days through Audible. Just couldn’t leave that world and wanted more. Beautiful characters that make you want to be a part of ‘the company’. I would send more chocolate your way if I could just as a thank you for the wonderful world you have introduced me too. I hope you will consider to keep putting your future books on Audible as well. Then I can stay immersed as I craft. Well anyway, since I have to wait till next spring for the next one (pout), I guess I will have to listen to the first 3 all over again. With how much I loved these books I have a feeling that will happen many more times. Thank you!

Well that makes me a very happy author! It is certainly in my plans to take all books to audio. However, that is something that needs renegotiating (hate all that). You know I am currently looking to add active readers to my Advance Reader Group on facebook. We talk about the books, find typos … I sometimes ask research questions related to upcoming books and most ARs will leave reviews on the various platforms when books are released. If you’re interested, I’d love to see you there. Just look for R.K.Lander Advance Reader Group

I have enjoyed “The Sylvan” Saga so much. It has snagged my inner-curiosity of adventure with this wholesome story of Eleven mythology. Thank you! this is a well written series, it has enticed my long time interest in Eleven lore. I can’t wait to read the next book in this Saga. I hope you know how much your fictional story of adventure and intrigue have sparked my enjoyment for these exhilarating tales of literature.

Wow thank you Brad. I am working hard on book four and trying not to drown in too much politics! As I said to Jen above, I am looking for active readers to join my Advance Reader group so if you’re interested, I’d love to see you there.

Hi Joe. Thank you for writing in, feedback like this is what keeps me going. Just hop on over th Facebook and search for R.K.Lander Advance Readers. Answer the question and I’ll open the door. If you have any problems, let me know and I’ll send you the link.

i have read Alfreds post below and so totally agree. Your books are amazing, fantastic, absolutely brillant. I am desperately waiting for book 4 to come to audible. I really like that you have not brought too much of the politics. please Please keep writing more books.

Thank you so much, Nicola. I am thrilled, honestly. As you may know, the book is due out 30th May but the audiobook will be a little longer coming. Still, we have the same narrator, which makes me happy!! I do try to keep the politics down as much as possible, however as we draw closer to the end of the main story arc, it is inevitable that there will be some – hopefully not too much to be boring! I hope you’ll stay posted, either by signing up for the newsletter or following the blog. I truly appreciate your words.